"17 years..." the veteranarian murmured in the room with dim lights. "Did you have him the whole time?" I nod. "It looks like he had a good mom... and a good brother too," she says, tilting her head towards Sam, the 8-year-old squirming next to me on the couch, occasionally rubbing my back.

We live in Berkeley, where everyone is a "pet parent" and defaulting to extraordinary measures. That's not me. Leaving aside the fact that I use a made-up nonbinary parent term with my own kids, I was never Vitty's mom. And he was old enough to be a slightly cantankerous but patient uncle by the time the kids came along.

Vitty was our pet, but first he was mine. Following a disastrous trip at the beginning of summer 2004, I talked a friend into taking me to the Chicago animal shelter. There, a tiny gray kitten they'd named Kenny opened his eyes and started purring at me. That was that; I had no choice but to take him home. I named him Vitya, after the titular brother of the Russian movie duology Брат 'Brother', who lived it up in Chicago in the sequel. This Russian diminutive quickly diminutized further into "Vitty" by my roommate Amol, and it stuck. 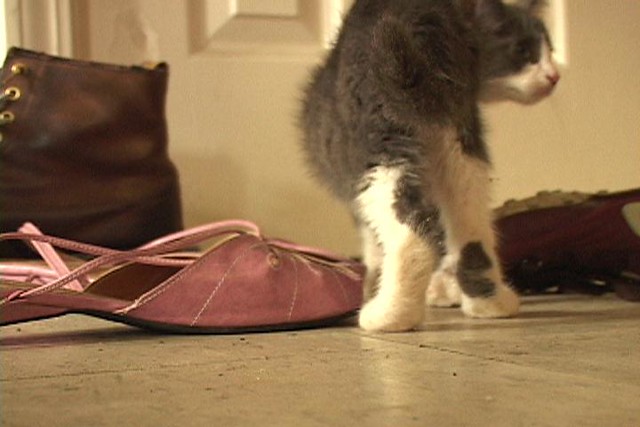 The adoption process involved a tower of lies. Our landlord was a cheap and dodgy establishment where the staff chain-smoked in the 80's throwback wood panel office where we dropped off our monthly checks. Technically, renters had to have written permission from their landlord to adopt a pet, but that wasn't going to happen, and I was young and desperately lonely. I'd heard of a scheme whereby wealthy parents of UChicago students would buy an off-campus condo for their kid and sell on to the next well-connected family after graduation. My family celebrated special occasions at Olive Garden, but leaning on a childhood spent doing community theater, I summoned up the airy confidence of my better-off peers for the purposes of the Chicago animal shelter. Oh no, I don't rent, my parents own the condo. And, when asked the formulaic set of questions about my commitment and ability to take care of a pet long-term, I went for a whopper: Absolutely! I want my children to grow up and remember this cat! I had zero intention of ever having children, but it seemed like the right answer for staying in character. They sent him with me in a cardboard box carrier, with the suggestion, "If he starts climbing the walls, consider coming back for a second kitten!" I did exactly that, a month later, and brought home Alla, a fluffy calico kitten. 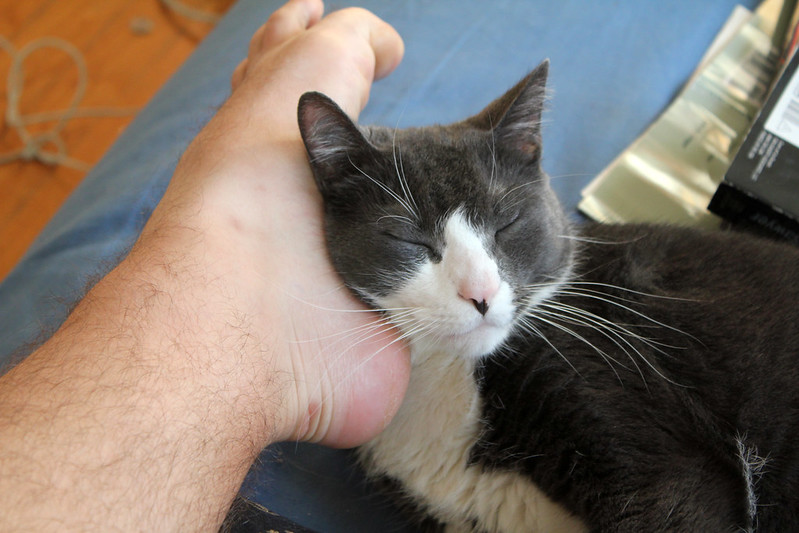 Vitty grew up in a chaotic college apartment. There was that time I came into the kitchen to find one of our roommates attempting to shoo a raccoon-invader back outside, and I had to scramble to make sure Vitty was safe. Vitty welcomed all guests, especially ones willing to pet him. Andy, the roommate I eventually married, was mildly allergic, so Vitty adapted himself to foot-rubs. He loved the porch (and later, to my terror, the outside window ledge of our highrise apartment), and had an everlasting hatred of the hair dryer, which he would attack with a vengeance if he ever saw it in use. He was athletic in his younger days, able to pull off impressive jumping feats, but always a little short on brains. Alla was the Jean to Vitty's Jorts. One time we held a piece of ham just beyond the range of Vitty's best jumps -- which didn't stop him from jumping and jumping and jumping until Alla came in, assessed the situation, hopped up on a chair, grabbed the ham, and left Vitty wondering what had just happened.

Time passed; our close-knit group of college roommates scattered, other than the two of us who got married soon after college. Vitty showed my in-laws' standard poodle who was boss, when our cats stayed with them during our month at the Medieval Summer Slavic Institute -- where I learned that you can both have kids and do intellectually rewarding work, and realized that having a family doesn't have to mean recreating your own family of origin. 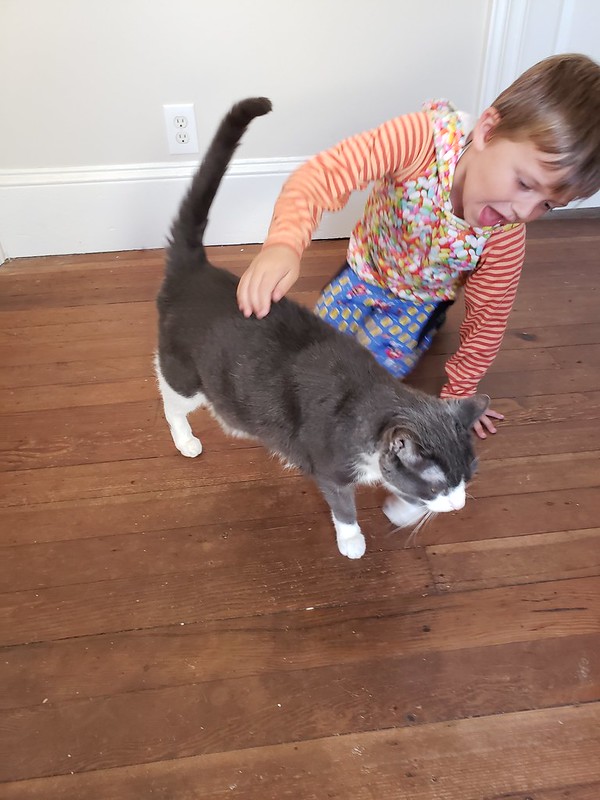 But it did mean a new set of demands that get more complex, even as they no longer take up 100% of your waking hours (assuming school and childcare are a thing-- faith in that infrastructure has been unsteady at best since the pandemic). I always saw myself as a pet owner, but my sense of where "having a cat" fell on the daily life-impact continuum between having, say, children and cast-iron skillets shifted after having human children. The cats mostly looked after themselves; there were days, especially with infants, when I was so overwhelmed by touch-demands that petting a cat was not in the cards, but they seemed to not mind too much. Alla steered clear of the kids as they grew, but Vitty patiently indulged them in their "cat-sitting" and other hijinks. Only in the last year -- aged 8, 6, and 4 -- had the kids started actively seeking out the cats to pet them, delighting in the purring, snuggles, and head-butting that would result.

Sam developed a fear of death -- developmentally unremarkable, but intensified by the pandemic. He doesn't even want to say the word, but over the course of the past few months, he's asked about how old the cats are "and when will they ... you know ..." 😬

Vitty hadn't been eating much for the last week, and was having trouble getting up and down the stairs. He'd been losing control of bodily functions, and I found him curled up in the bathtub. I got him a can of tuna -- he perked up a little at the sound of the can opener, the memory of his kittenhood non-pull-top cat food still in his brain somewhere -- but he could only lick up the water, and didn't touch the food. Sam asked, afterwards, how I knew it was his time to go. "He didn't even eat the tuna," I told him. "And there's nothing Vitty loves more than tuna."

Andy said goodbye and wrapped Vitty up in a towel. Vitty usually would never stand for that, but he didn't budge. Paul, the 6-year-old, petted Vitty's head. Eliza, the 4-year-old, was asleep, but was confused by the proceedings anyway. When we'd explained things, she'd thought we were going to euthanize Paul for having a bout of GI issues, and then got mad when we tried to set the record straight because clearly euthanizing Paul was the right thing to do in this situation. "Aww, now I'm not going to have a black kitty anymore," she sighed once we got back, so something must have made it through. We grabbed masks; I realized only later they were muted rainbow KF94s, evoking that old "Rainbow Bridge" poem about being reunited with one's dead pets. The animal hospital is just two doors down. We walked.

Vitty died in my arms yesterday afternoon, with an 8-year-old by my side, who I never could've imagined that day at the Chicago animal shelter when I was 19. Mourning a very good cat you've had for nearly your entire adult life is enough on its own, but this feels like more. It's mourning my first cat, Rosebud, who my stepmother disappeared when I was an exchange student and who was never spoken of again. It's mourning the Hyde Park of my memories, the place I went first when I escaped home, now completely transformed. It's mourning the little commune we had going in college -- the way the three of us who started grad school fantasized of being professors together someday in the same place, living in condos next to each other. I designated them the (non-religious) godfathers for my first two kids, to strengthen that bond, but now 2-3 years have passed since we've seen them. It's mourning the friends I've lost -- Stéfan, Maurice, Rebecca, Scott -- without having conferences to bring us to the same bar at the same time in their memory. It's mourning my grandmother, who died last fall with no funeral planned. It's mourning my aunt-in-law who loved animals and died suddenly right before Christmas, whose funeral my husband will go to while I stay with the kids. And how do you even try to grapple with the enormity of everything, especially since we've been so lucky as a family, with so few deaths out of that incomprehensible total?

When our old roommate Amol, now engaged, next comes to visit, we'll hold some kind of memorial service for Vitty. The logistics with ashes were more complicated than I could handle; Vitty will be buried communally in Napa. But we'll tell stories, and I'll dig up old photos and videos and maybe it'll be enough to keep that promise I made at the animal shelter. In Vitty's last minutes, I leaned over to Sam and told him, "I want you to remember -- please remember -- that when you were little, you had a cat named Vitty, and he wasn't the smartest cat, but he was a very good cat who loved everyone so much." He nodded seriously. "I'll write it down in my notebook." 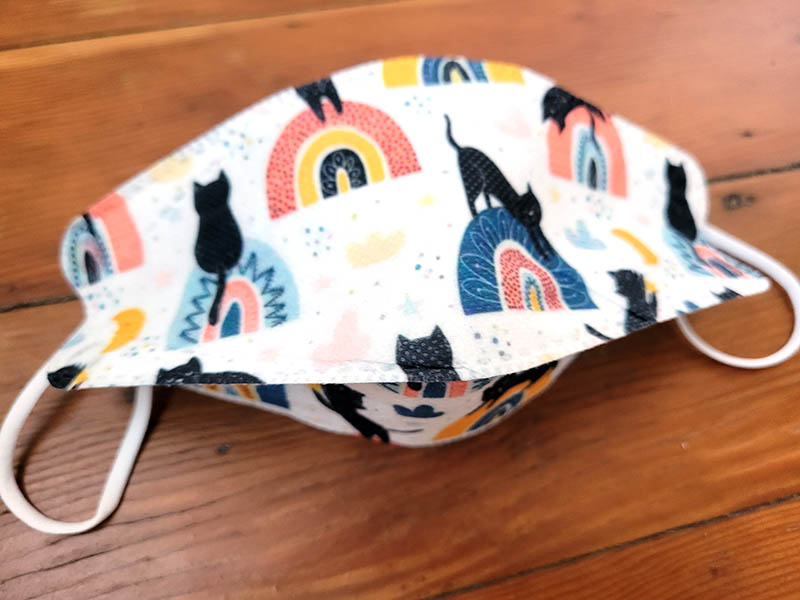