A Week With Mastodon

I joined Mastodon in late April 2022, when talk of a Musk acquisition of Twitter got serious and people started talking about finding other platforms. This news was emphatically not what I needed at that moment -- I was two months into SUCHO and had my hands full, but the possibility of my Twitter networks dissolving was horrifying enough to merit some time. My job is supporting digital humanities work on non-English literatures (okay, technically excluding East Asian and Classics, but I end up talking with plenty of people over there, too). That work can take the form of many research questions, which need many kinds of methods. I'm only one person; there's no way to follow developments across all those languages and methods. Except via something like Twitter. It is no exaggeration to say that I could not do my job well without being able to see what people are up to in DH across the world, and ask questions with a reasonably high chance of getting an answer, when I get stuck on something.

Everyone leaving Twitter for something else would be inconvenient, but not the worst outcome -- the real danger felt like the possibility that people might drift away to more places than I could possibly be in, including lots of walled-garden Discords. Inevitably, there will be people who end up redirecting their energy towards platforms that fundamentally don't work for me, like TikTok (I avoid watching videos online almost as much as I avoid making phone calls) -- so it goes. But it did seem like there was a group of people who found Twitter itself to be a perfectly fine medium, other than the potential new "Chief Twit". Could those folks be encouraged to move together over to something roughly similar like Mastodon? 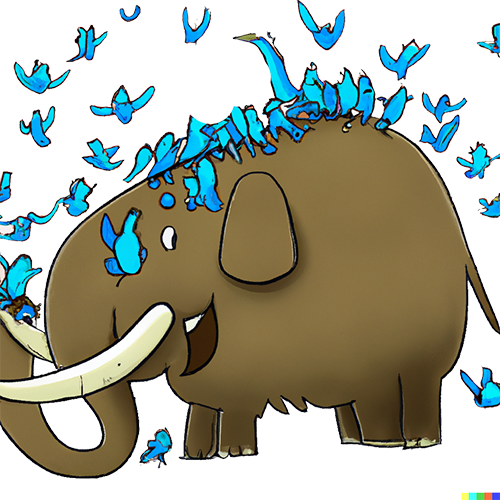 David Wrisley and I wrote up some notes on switching to Mastodon for the curious, documenting as we learned, ourselves. But in the end, few people made the leap. My Mastodon timeline was very quiet. I tried to find some new people to follow (especially around textiles), but in the end, it wasn't filling any kind of gap in my life. The app on my phone went unused. I set up the Mastodon Twitter cross-poster to mirror tweets about SUCHO so my Mastodon account wouldn't be entirely abandoned, but I rarely checked it, and little was going on when I did.

When the Twitter acquisition deal closed, it was the same discourse but more intensely. People looking to leave, trying out Mastodon (even as others insisted they'd stay until the end, and critiqued the urge to leave) -- and suddenly it felt like it might actually work to recreate at least some Twitter networks elsewhere. People I knew were posting things, I was following new people, figuring out how to actually navigate this new space, trying to help people who knew even less than me. It had the vibes of an earlier era of internet spaces. I joined to try to cultivate some kind of alternative for Twitter-quitters, but to my surprise, I found myself enjoying it for what it was, as a less-frenetic, slower-paced space with old and new friends.

There were early missteps in self-organization: people adding other people to lists of academics, in the way that one used to create lists on Twitter in the 2000's -- and who then were schooled by Mastodon users about serious community norms around consent and opting in instead of out. A model that emerged (very quickly, over the course of a day or so) was self-sign-up forms with public result sheets. The historians seemed to be among the first academic groups overlapping with DH to self-organize; literature folks followed. By the morning of Saturday, November 5th, when no one had taken the plunge to make a DH form, I violated my own rule against making directories and created one for DH people on Mastodon. (It's self-sign-up! Should basically take care of itself! But yes, in reality, it's involved some curation work as people submit twice, or change Mastodon handles, because of course it does.)

I'm not going to delete my Twitter account anytime soon -- it's still where most people are, and I figure odds are good that the Mastodon experiment is temporary for many people. I don't have any delusions of being a public academic, but SUCHO is part of a network of journalism, political scientists, analysts, and Ukrainians in Ukraine and abroad, and that seems unlikely to move. But between the large-scale layoffs (that do not sound like they were particularly thoughtful with regard to who does the maintenance), and the rollout of a paid plan with suggestions that posts from unpaid accounts will be deprioritized in visibility, I'm not simply assuming Twitter will be around in the long term, the way I did earlier this year. Gradual network drift over time once again raises the likelihood of people ending up in many different corners of the internet, but at least for the moment, I want to try to cultivate a space with Mastodon where DH folks looking for some flavor of DH Twitter can find a meaningful community. That won't happen by itself. It will take labor (mostly the unrecognized kind) and deliberate choices -- and there's, to be perfectly frank, a lot of cringe to overcome even as a starting place. (Mastodon does itself no favors with "toots", even if many servers in practice swap that word for "posts".)

The servers are another hurdle: there's no "Mastodon" you can sign up for like there's a "Twitter". Step 0 is to pick a server, and there's many long lists to scroll through, as well as the possibility of setting up your own. As many people have noted, the flip side of the many thematically-scoped servers is that people are complex: maybe you're a queer 18th centuryist in the Bay Area who enjoys knitting and follows AI ethics, so which of the 5+ applicable thematic servers do you choose? (The cheery response of "You can have different accounts on different servers!" sounds exhausting.) I'm interested in early rumblings of possible DH (and/or broader humanities) instances, though I worry about maintenance, moderation, funding, sustainability -- all the usual questions about shared infrastructure, because I feel deeply uncomfortable with the idea of running this as a volunteer effort. (I've signed up for the Patreon for the server I'm on, and will probably increase the monthly donation if I stay here.)

A week in, I'm actually liking being on a general server. Sure, the "local" feed is useless-- but maybe it would be even on a DH or Humanities instance, too, since I've always taken a pretty curated approach to my feed, even on Twitter. It's not a problem at all to follow people on other servers -- the vast majority of the people I follow are located "elsewhere", but they fill my home feed as if we were in the same space. And a general server doesn't provoke an identity crisis ("am I 'library' enough for the library servers?") and there's no application process where I need to justify myself. There's not a lot of very specific rules (e.g. no Twitter cross-posting, as on scholar.social) or moderators who'll yell at you for not following them because you didn't read the long TOS upfront. And its uptime has been excellent, even as it's added new users -- shout-out to stux who runs it. I'd rather have a server that reliably works over one where I "fit in", whatever that would even look like. I suppose what that looked like was the Twitter network I'd built over 15 years. Doing that again anywhere, if it's even possible twice, will take time.

I don't know how any of this will shake out; perhaps, in the end, Mastodon will end up having been a brief distraction, and enough people will make the compromise of paying Elon Musk to be able to continue to find one another's posts in a sea of ads and promoted content. Maybe video will become the next major medium for sharing scholarship, and I'll have to come to terms with watching them. But for the moment, I'll be trying to make some kind of worthwhile space over at Mastodon, following the conversations about community infrastructure, and hoping that with some time and care, it can be a viable alternative for many people in my networks if Twitter becomes intolerable -- and not just for the "whee, new tech!" crowd.

If you'd like to join a general instance with no application process or identity-angsting, you're welcome to use my invite link for mstdn.social.)

A post by Cory Doctorow on "How to Leave Dying Social Media Platforms (without ditching your friends)" is one of the things I read early in this week's Mastodon-oriented activity that has stuck with me.

Hendrik Erz has put together a list of lists of academics on Mastodon that includes my list of DH folks that you can also add yourself to.